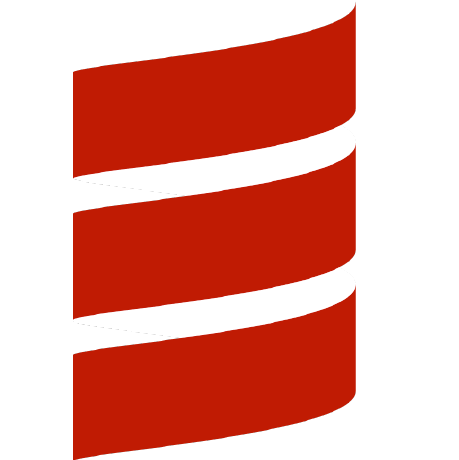 This is the official repository for the Scala Programming Language.

To contribute to the Scala Standard Library, Scala Compiler and Scala Language Specification, please send us a pull request from your fork of this repository! We do have to ask you to sign the Scala CLA before we can merge any of your work into our code base, to protect its open source nature.

For more information on building and developing the core of Scala, make sure to read the rest of this README!

We're still using Jira for issue reporting, so please report any issues over there. (We would love to start using GitHub Issues, but we're too resource-constrained to take on this migration right now.)

If you need some help with your PR at any time, please feel free to @-mention anyone from the list below, and we will do our best to help you out:

P.S.: If you have some spare time to help out around here, we would be delighted to add your name to this list!

Get Ready to Contribute

You need the following tools:

Mac OS X and Linux work. Windows may work if you use Cygwin. Community help with keeping the build working on Windows is appreciated.

During ordinary development, a new Scala build is built by the previously released version. For short we call the previous release "starr": the stable reference Scala release. Building with starr is sufficient for most kinds of changes.

However, a full build of Scala (a bootstrap, as performed by our CI) requires two layers. This guarantees that every Scala version can build itself. If you change the code generation part of the Scala compiler, your changes will only show up in the bytecode of the library and compiler after a bootstrap. See below for how to do a bootstrap build locally.

For history on how the current scheme was arrived at, see https://groups.google.com/d/topic/scala-internals/gp5JsM1E0Fo/discussion.

We recommend to keep local test files in the sandbox directory which is listed in the .gitignore of the Scala repo.

Note that sbt's incremental compilation is often too coarse for the Scala compiler codebase and re-compiles too many files, resulting in long build times (check sbt#1104 for progress on that front). In the meantime you can:

To perform a bootstrap using sbt

The last step is required to resolve modules (scala-xml, scala-partest, etc). It assumes that the module releases for the current starr work (in terms of binary compatibility) with the local starr that you published locally. A full bootstrap requires re-building the all the modules. On our CI this is handled by the bootstrap script, but it (currently) cannot be easily executed locally.

You may use IntelliJ IDEA (see src/intellij/README.md), the Scala IDE for Eclipse (see src/eclipse/README.md), or ENSIME (see this page on the ENSIME site).

In order to use IntelliJ's incremental compiler:

Now you can edit and build in IntelliJ and use the scripts (compiler, REPL) to directly test your changes. You can also run the scala, scalac and partest commands in sbt. Enable "Ant mode" (explained above) to prevent sbt's incremental compiler from re-compiling (too many) files before each partest invocation.

Our guidelines for contributing are explained in CONTRIBUTING.md. It contains useful information on our coding standards, testing, documentation, how we use git and GitHub and how to get your code reviewed.

You may also want to check out the following resources:

Once you submit a PR your commits will be automatically tested by the Scala CI.

If you see a spurious build failure, you can post /rebuild as a PR comment. The scabot README lists all available commands.

If you'd like to test your patch before having everything polished for review, feel free to submit a PR and add the WIP label. In case your WIP branch contains a large number of commits (that you didn't clean up / squash yet for review), consider adding [ci: last-only] to the PR title. That way only the last commit will be tested, saving some energy and CI-resources. Note that inactive WIP PRs will be closed eventually, which does not mean the change is being rejected.

CI performs a full bootstrap. The first task, validate-publish-core, publishes a build of your commit to the temporary repository https://scala-ci.typesafe.com/artifactory/scala-pr-validation-snapshots. Note that this build is not yet bootstrapped, its bytecode is built using the current starr. The version number is 2.12.0-abcd123-SNAPSHOT where abcd123 is the commit hash.

You can use Scala builds in the validation repository locally by adding a resolver and specifying the corresponding scalaVersion:

Note that the scala modules are currently not built / published against the tested version during CI validation.

The Scala CI builds nightly download releases (including all modules) and publishes them to the following locations:

Note that we currently don't publish nightly (or SNAPSHOT) builds in maven or ivy format to any repository. You can track progress on this front at scala-jenkins-infra#133 and scala-dev#68.

The Scala CI runs as a Jenkins instance on scala-ci.typesafe.com, configured by a chef cookbook at scala/scala-jenkins-infra.

The build bot that watches PRs, triggers testing builds and applies the "reviewed" label after an LGTM comment is in the scala/scabot repo.

The community build is a central element for testing Scala releases. A community build can be launched for any Scala revision / commit. It first builds the Scala library and compiler and then uses that Scala version to build a large number of open-source projects from source.