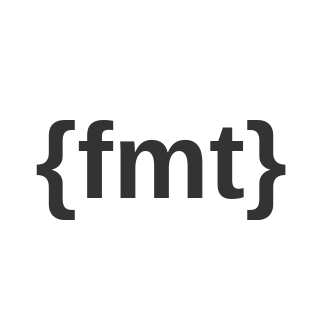 See the documentation for more details.

This prints Hello, world! to stdout:

Arguments can be accessed by position and arguments' indices can be repeated:

fmt can be used as a safe portable replacement for itoa:

An object of any user-defined type for which there is an overloaded std::ostream insertion operator (operator<<) can be formatted:

You can use the FMT_VARIADIC macro to create your own functions similar to format and print which take arbitrary arguments:

Note that you only need to define one function that takes fmt::ArgList argument. FMT_VARIADIC automatically defines necessary wrappers that accept variable number of arguments.

If you are aware of other projects using this library, please let me know by email or by submitting an issue.

So why yet another formatting library?

There are plenty of methods for doing this task, from standard ones like the printf family of function and IOStreams to Boost Format library and FastFormat. The reason for creating a new library is that every existing solution that I found either had serious issues or didn't provide all the features I needed.

The good thing about printf is that it is pretty fast and readily available being a part of the C standard library. The main drawback is that it doesn't support user-defined types. Printf also has safety issues although they are mostly solved with __attribute__ ((format (printf, ...)) in GCC. There is a POSIX extension that adds positional arguments required for i18n to printf but it is not a part of C99 and may not be available on some platforms.

The main issue with IOStreams is best illustrated with an example:

which is a lot of typing compared to printf:

Matthew Wilson, the author of FastFormat, referred to this situation with IOStreams as "chevron hell". IOStreams doesn't support positional arguments by design.

The good part is that IOStreams supports user-defined types and is safe although error reporting is awkward.

This is a very powerful library which supports both printf-like format strings and positional arguments. The main its drawback is performance. According to various benchmarks it is much slower than other methods considered here. Boost Format also has excessive build times and severe code bloat issues (see Benchmarks).

This is an interesting library which is fast, safe and has positional arguments. However it has significant limitations, citing its author:

Three features that have no hope of being accommodated within the current design are:

It is also quite big and has a heavy dependency, STLSoft, which might be too restrictive for using it in some projects.

SafeFormat is a formatting library which uses printf-like format strings and is type safe. It doesn't support user-defined types or positional arguments. It makes unconventional use of operator() for passing format arguments.

This library supports printf-like format strings and is very small and fast. Unfortunately it doesn't support positional arguments and wrapping it in C++98 is somewhat difficult. Also its performance and code compactness are limited by IOStreams.

This is not really a formatting library but I decided to include it here for completeness. As IOStreams it suffers from the problem of mixing verbatim text with arguments. The library is pretty fast, but slower on integer formatting than fmt::Writer on Karma's own benchmark, see Fast integer to string conversion in C++.

As you can see boost::format is much slower than the alternative methods; this is confirmed by other tests. Tinyformat is quite good coming close to IOStreams. Unfortunately tinyformat cannot be faster than the IOStreams because it uses them internally. Performance of fmt is close to that of printf, being faster than printf on integer formatting, but slower on floating-point formatting which dominates this benchmark.

The script bloat-test.py from format-benchmark tests compile time and code bloat for nontrivial projects. It generates 100 translation units and uses printf() or its alternative five times in each to simulate a medium sized project. The resulting executable size and compile time (g++-4.8.1, Ubuntu GNU/Linux 13.10, best of three) is shown in the following tables.

As you can see, fmt has two times less overhead in terms of resulting code size compared to IOStreams and comes pretty close to printf. Boost Format has by far the largest overheads.

libc, libstdc++ and libfmt are all linked as shared libraries to compare formatting function overhead only. Boost Format and tinyformat are header-only libraries so they don't provide any linkage options.

Please refer to Building the library for the instructions on how to build the library and run the unit tests.

Benchmarks reside in a separate repository, format-benchmarks, so to run the benchmarks you first need to clone this repository and generate Makefiles with CMake:

Then you can run the speed test:

or the bloat test:

fmt is distributed under the BSD license.

The fmt library is maintained by Victor Zverovich (vitaut) and Jonathan Müller (foonathan) with contributions from many other people. See Contributors and Releases for some of the names. Let us know if your contribution is not listed or mentioned incorrectly and we'll make it right.

The benchmark section of this readme file and the performance tests are taken from the excellent tinyformat library written by Chris Foster. Boost Format library is acknowledged transitively since it had some influence on tinyformat. Some ideas used in the implementation are borrowed from Loki SafeFormat and Diagnostic API in Clang. Format string syntax and the documentation are based on Python's str.format. Thanks Doug Turnbull for his valuable comments and contribution to the design of the type-safe API and Gregory Czajkowski for implementing binary formatting. Thanks Ruslan Baratov for comprehensive comparison of integer formatting algorithms and useful comments regarding performance, Boris Kaul for C++ counting digits benchmark. Thanks to CarterLi for contributing various improvements to the code.